Since about 1633, members of the Habsburg dynasty have enjoyed a rare privilege: their own private burial vault under the Capuchin Church in Vienna.  It’s right in the middle of the city. Someday maybe I’ll pay a few Euros and descend into the vault, but so far I get creeped out every time I consider doing it. The vault is really a series of underground rooms, some of them domed so that daylight enters. About 145 Habsburgs rest there in their elaborate tombs, and some Habsburgs are still eligible even though the monarchy is long gone.  The most recent burial was in 2011. I think the statue outside is St. Peter, very appropriate for the royal pearly gates. 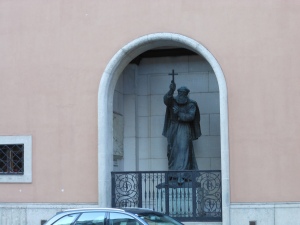 In an age when common people (and geniuses like Wolfgang Amadeus Mozart) were usually buried in unmarked mass graves, the Habsburgs enjoyed their privilege.  It would not do to flaunt the luxury of a grand burial vault, though.

Early on, a Habsburg PR person came up with a brilliant idea: a ceremony of regal humility that precedes each burial.  The royal procession arrives at the church door and an official knocks–with a special regal staff, of course.  Crowds of commoners outside listen breathlessly to the ritual. A waiting monk inside the door calls out, “Who is there?” The official recites all the titles of the deceased–and with the Habsburgs, it was always a long and impressive list. The waiting monk answers, mournfully, “We do not know him.”  The official knocks again.  The monk asks, “Who is there?” The official recites an abbreviated list of titles.  Again, the waiting monk replies, “We do not know him.”  FInally, after the third knock on the door, the official says, “Here is (insert name), a poor sinner.”  The door swings open and the procession enters.

In a previous post, “A Tragic Crown Prince,” I wrote about Rudolf, the frustrated son of Emperor Franz Joseph.   This young man could see that change was in the air, and tried his best, in his muddled way, to convince his father to go with the flow in order to hang on to power.  Franz Joseph would have none of it.  Rudolf committed suicide, along with his mistress, rather than live out his life in the gilded cage of the monarchy that was soon to be swept away by sweeping social change. That post is at https://castlesandcoffeehouses.com/2014/02/07/a-tragic-crown-prince/. A favorite movie of mine–I guess it’s a guilty pleasure–begins and ends with the Capuchin Church ceremony for poor Rudolf, with his heartbroken but stoic father, Emperor Franz Joseph, patiently waiting to enter the church. Those knocks on the massive church door get me every time.