With great fanfare, the Vienna Kunsthistorisches Museum, or Museum of Fine Arts, opened a new wing a year ago: the Kunstkammer. Its twenty grand galleries contain many of the curiosities and playthings the Habsburgs collected during the six centuries they ruled a vast empire. Among the treasures displayed, a graceful figure about a foot high appealed to me. 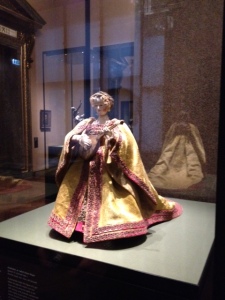 She was crafted of wood, iron, linen and silk brocade in the mid-1500s. She’s an android from the past, designed to astonish banquet guests by moving down the center of the table, turning her head and playing the musical instrument she holds.  It’s called a cittern.  The lady contains a music box which makes it appear that she is playing the stringed instrument. She was made by a famous Spanish clockmaker, Juanelo Toriano, who worked for Emperor Charles V. 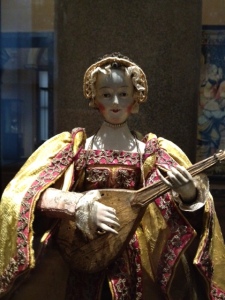 Her caption explains that aside from simple entertainment value, such figures were highly prized because they demonstrated the human ability to imitate Nature, and thus to participate to some degree in the divine act of creation.  I have to wonder if the men who dreamed up this particular figure would like to have controlled their real-life women as well as they could control this sweet-faced little lady. Be that as it may, her charming but enigmatic smile is a window into the past.