The streets of the old city center are enchanting, especially at this season. The tall column, liberally coated in gold, was built in the late 1600s in gratitude for the ending of a bad episode of plague, before everyone in the entire city died. It’s a riot of triumphant angels, with the Emperor Leopold front and center. The plague is long forgotten but the column takes its place in the exuberant life of Vienna. 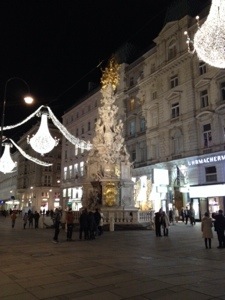