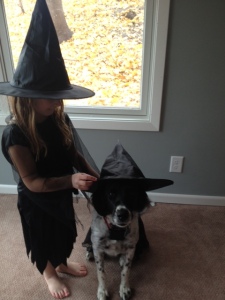 The origins of the holiday we know as Halloween are lost in the mists of time–maybe they’re Celtic or Welsh, maybe Roman.  The Christian liturgical calendar celebrates All Saints’ Day on November 1 and All Souls’ Day on November 2, thus giving the night of October 31 the name All Hallows Eve.  In parts of Europe, the three days around what we call Halloween are still celebrated as religious holidays when the departed are remembered–and when they possibly  walk the earth.  Jack-o-Lanterns might have begun as representations of wayward spirits.

Many churches displayed the relics of saints during these days.  Some historians theorize that parishes too poor to own any actual saintly relics encouraged parishioners to dress up as their favorite saints instead.  Then again, some historians believe that costumes were first worn as disguises to prevent any of the dead from seeking vengeance against their still-alive enemies.  Pretty deep stuff! 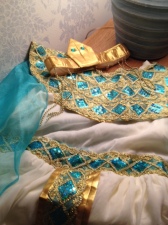 As for me, I’ll be celebrating Halloween with kids–and that includes both children and adults who give themselves permission to be someone or something else for a few hours. I’m Cleopatra! I expect plenty of pets will get in on the fun, too. Happy Halloween to all!