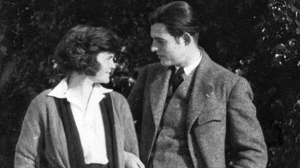 Ernest and Hadley, Winter 1922, photo from NPR article cited below

In the golden days of Ernest Hemingway’s youthful career as a writer, he and his athletic first wife Hadley used to escape wintery, gray Paris for a sunny ski town in Austria.  In the 1920s, they could live in Schruns on a shoestring all winter, enjoying crisp snow and roaring fires.  Hadley cheerfully hiked up and skied down bunny hills just behind the hotel while the great man labored at his writing, then joined him for cozy evenings.

A couple of weeks ago I made a literary pilgrimage to the town of Schruns.  (Actually, it was more of a flying visit on a gray rainy day).  There is not a whole lot to see, but I found it moving to stand outside the actual railway station where Hadley and their toddler son Bumby waited to meet Hemingway after he returned from a pivotal meeting in New York, where he made his first major sale. 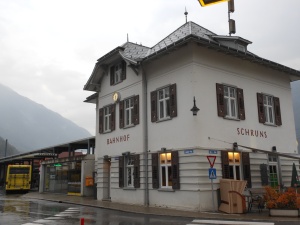 What Hadley didn’t know at the time was that Hemingway had spent the previous few days with Pauline Pfeiffer, her supposed best friend.  Pauline would shortly become the second Mrs. Hemingway. 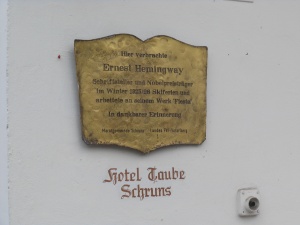 The station is just a short walk from the hotel where the young family stayed–and where Pauline had previously insinuated herself for months, supposedly to keep Hadley company, while she single-mindedly pursued Hemingway.  Hadley must have been a little dim to have missed all this going on under her nose, especially when Pauline and Hemingway left at the same time. 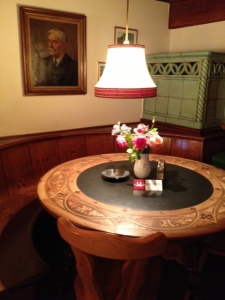 Anyway, the hotel still stands.  It’s been remodeled inside, but there is still an actual table from the bar as it was in 1922, when Hemingway regaled Hadley, Pauline and his cronies with his skiing  and writing exploits.

I’m about to re-read Hemingway’s own account of that time in his memoir, A Moveable Feast.

Recently I read an interesting account of Hadley’s life with Hemingway in The Paris Wife by Paula McLain.

Join me next time for more explorations into the art and history of Europe–the major sights and the fascinating byways!