While watching the BBC series Lost Empires, I am sure I recognized one of the locations:  the Opera House in Buxton, England. Built in 1903, the 902-seat theater hosted music-hall shows and other live entertainments in the very period depicted in the series, 1913. (I described this excellent series in yesterday’s post). By 1927, movies had overtaken variety shows in popularity.  The theater turned into a cinema.  In 1979, it was refurbished for live performance, which continue year-round to this day.  I’d love to be there for the annual Gilbert and Sullivan Festival, but I don’t like to travel in the height of summer.  So I take potluck when I go. There is some kind of live entertainment, or a high-quality film, almost every night of the year. 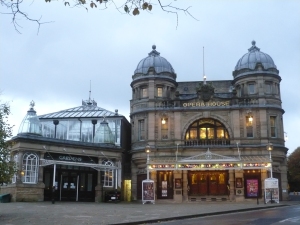 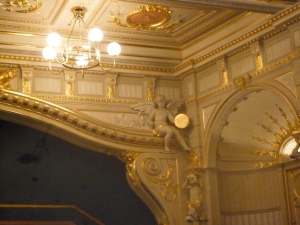 The theater interior is beautiful, white with gilded cherubs, curlicues galore,  and red velvet curtains.  There is not a bad seat in the house, not even way up in “the gods”–theater parlance for the very highest and cheapest seats. In Lost Empires, the seasoned trouper played by Laurence Olivier cautions the young performer played by Colin Firth to always play to “the gods”–the customers in the cheap seats.  They can make you or break you, soon-to-be washed-up performer warns, and he should know. 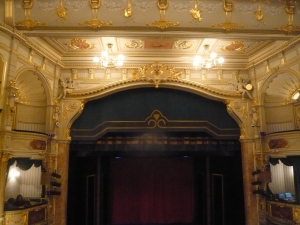 I once saw a mountain-climbing documentary at the Opera House.  Another time, I saw a very good touring performance of the play “The Madness of King George.” Last time I was in Buxton (to visit nearby Chatsworth and to enjoy the beauty of Derbyshire), I bought tickets for an event I probably would have given a miss, if there had been anything else going on.  There was a Queen tribute band, starring Patrick Meyers as the late Freddie Mercury.  As it turned out, I had a great time.  The band is called Killer Queen.  They fill large stadiums, and they put on a smaller-scaled show for venues like the Buxton Opera House.  Patrick Meyers does not quite have the 4-octave range of Freddie Mercury, but he makes up for it in showmanship, passion, knowledge of his subject, and sheer kinetic energy.

Patrick/Freddie danced and sang his heart out, flinging a series of flamboyant satin jackets out into the audience at just the right moments. And so it went, through the great classic rock repertory of Queen: “Bohemian Rhapsody,” “Killer Queen,” “Somebody to Love,” “Don’t Stop Me Now,” “Crazy Little Thing Called Love,” and of course the anthem “We are the Champions.”

The audience was almost as entertaining as the show itself.  The first two rows were filled with teenagers and young adults from a nearby school for people with various disabilities.  To prepare for the outing, they must have been listening to Queen albums nonstop. Many of them knew every song by heart and sang along, with gusto.  They jumped up and danced, too–which Mr. Meyer tried in vain to get the rest of the audience to do.

One young man in particular was in ecstasy through the entire performance.  He kept moving right up to the stage apron, pounding out the rhythms with his hands.  Every now and then, a teacher would gently lead him back to his seat, but he popped up again every time.  He just couldn’t help it.  He sang every word of every song, and he shouted and spun in circles between songs.

When the show ended, and the curtain calls were done, the band’s drummer dashed to the front of the stage and handed his drumsticks–probably still smoking from the heat of the performance–to this young man.

Until I attended this show, I had never quite understood the fuss about Queen, or the influence on the development of rock. Now I get it.  Reportedly Sacha Baron Cohen is developing a film about the remarkable journey that the multi-talented Farrokh Bulsara took to become Freddie Mercury.

Freddie Mercury died of AIDS in 1987.  I like to think that his talent and creativity live on in memory, and in performances like the one I almost didn’t go to see. I imagine the young man who received the special drumsticks still treasures them as a memory of a wonderful night.

The music hall tradition lives on in Great Britain, taking new forms and honoring old ones. Tastes have changed over time, but the need for audiences and performers to connect remains the same.