I can’t speak for everyone, but I like the show for the sheer Englishness of it.  The show actually depicts a long-vanished England, so there’s an element of nostalgia, too.  And the England depicted never did really exist except for a very tiny minority of aristocratic people and the comparatively small number of ordinary people who served them in their grand country homes.  So there’s a large element of fantasy.

Even today, as England becomes more and more diverse, I love the uniquely English expressions, habits and ways of looking at the world. For example, here is a sign that stands outside the very old, very ornate gate of the private driveway of Chatsworth House, in Derbyshire: 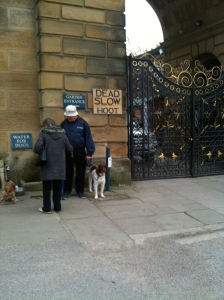 The hand-lettered sign reads “Dead Slow. Hoot.”  What does it mean?  I could not think of any legitimate reason that as a lowly tourist, I could drive up to the private gate and demand entry.  But I think the sign means that drivers are to approach the gate as slowly as humanly possible, and then  to sound their horns to be let in.  The word “Hoot” implies, of course, a decorous tap, not a prolonged blast. Apparently there is no automatic opener and no card-recognition system on the 18th-century gate.  Someone will have to run out, confer with the driver, and swing the gate open.

Notice also the gathering of people and animals beside the gate.  The wearing of practical rain gear and the watering of dogs are hallowed activities in the countryside of England. So is the visiting of stately homes–it has been a favorite pastime at least since the days of Jane Austen.  In Pride and Prejudice, Elizabeth Bennet famously changes her fate when against her better judgment she tours Mr. Darcy’s estate, Pemberly, and comes face to face with Mr. Darcy himself. Many people believe that Jane Austen based Pemberly on Chatsworth House.

I just read that the “real” Downton Abbey, Highclere Castle, is completely sold out of pre-bookable tickets for the coming opening times, mid-July to mid-September.  There are some tickets available to walk-ups, usually after 2 pm.  However, if I were traveling to England this summer, I would not let that worry me. I would go instead to Chatsworth House, and then I would go to at least a dozen other stately homes.  They’re all over England, and each has its own story every bit as fascinating as the fictional one so many of us love.

I’m going to write in coming posts about English country houses I have visited.  Join me next time for more explorations into the art and history of Europe–with the British Isles thrown in!